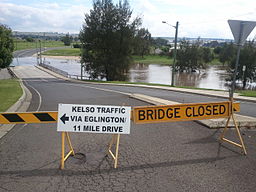 Most people who read a newspaper or watch television are by now aware of the terrible floods that are currently sweeping through Eastern Australia. With the rising popularity of gap years and growing expat communities ‘Down Under’ there will be more than a few worried families, looking for information on friends and family.

How did this become such a catastrophy? There are large numbers of papers out there, proposing models, theories and experiments to help us understand how floods happen and how we can predict them. To some extent it could be said that we are flooding the reader’s mind with a plethora of possibilities and explanations. This is not at all to say that this research is meaningless or outright wrong; the vast majority of these papers hold firm academic ground and are based on solid research. But why are we now looking at footage of people surrounded by flood water, stranded on roofs while cars and trees float by?

The Guardian (12/01/11) reports that these floods are caused by an exceptionally strong La Niña event, which is wreaking havoc on the eastern Australian climatic system. This in itself is not a surprising phenomenon; the exceptional strength of it however is surprising. The real elephant in the room is therefore; could we have prevented, or at least reduced, the loss of human life and property or was there absolutely nothing that could have reduced the impact? And is there anything that can be done to reduce the impact in Brisbane, where the water appears to be heading?

There are a number of research papers available which discuss the impact of flooding on communities. Lopez-Marrero (2010) argues for example that a community at flood risk can become too complacent knowing that they are well-protected by resources and knowledge but that equally knowledge and resources are the single most important factors in reducing flood damage such as loss of human life. Gurnell et al (2007) show that in urban environments, which Brisbane is a good example of, constant changing and engineering of the river course often leads to a loss of vegetation, which could be a loss of a first barrier especially in the case of flash floods. Many of us will remember the Boxing Day tsunami and its impact on the areas where mangroves were removed versus the area where mangroves still formed a protective barrier. Maybe we should look at this situation with a similar view, looking to the natural course of the river to protect us and deal with extreme events.

However, on the other end of the spectrum there is often a good reason for influence of man on the river course. Meanders, for example, are a natural part of any river system but are often chaotic and dynamic in their development (Hooke, 2003), something that often doesn’t go well with urban development. Especially in a time when flood risk due to climate change and increasing population pressure is becoming a reality rather than a possibility for many communities it will become increasingly important to predict and map these events before the death toll rises. Australia seems to have become one of the predominant victims of changes in the climate system, enduring recurring droughts, wildfires and now extreme flooding. If there ever was an equilibrium, which is debatable in the first place according to Bracken and Wainright (2006), it seems to be well and truly disturbed.

Hooke, J. (2003) “River meander behaviour and instability: a framework for analysis” Transactions of the Institute of British Geographers 28 (2) 238 – 253