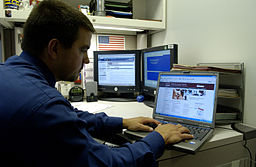 In one way or another geographers have long been concerned and intrigued by ‘work’. Geographical research has looked at, for example, the spatial division of labour, labour migration and the relationship between labour and gender. However, it has recently been noted that “geographers have been avoiding work. At least as an explicit research topic, work has been largely absent from the geography agenda” (McMorran 2012).

This apparent lack of geographical consideration is perhaps a little surprising given the contemporary changes to working practices that have been identified in the media. This week it has been announced that Yahoo! is to introduce measures to prevent employees working from home as the company believes that the interaction between staff in the office allows a more productive working environment. This move has surprised many given that Yahoo! are a IT firm and it is improvements to telecommunications and computing that have increased the ease with which people are able to work from home. Remote working is perceived to be increasing in popularity but its impacts are not well understood. Academic research has shown that those who work from home often receive smaller pay rises and fewer promotions. Questions have also been asked about the efficiency and work-output of those who work from home. Struggles to focus and concentrate on tasks are deemed to be an issue amongst remote workers and a University of Texas study has recently found that tele-commuters work an average of five to seven hours of week more than those who work in a normal office setting.

These contrasting findings indicate that there is a need to undertake geographical research into these issues and this is highlighted in McMorran’s recent publication in Area on “Practising workplace geographies”. Geography as a discipline is well placed to study working practices by employing ethnographic methodologies and other participatory methods. These techniques will enable a true picture of working practices to be observed rather than using interview or survey methods that are reliant on employees’ views and information about their own work. This issue has also been subject to media scrutiny this week in the wake of research indicating that surveys regarding alcohol consumption under report the true level of consumption in the UK. This raises questions about the general reliability of data collected in the course of research.

Therefore, these two contrasting media articles both demonstrate how geographical research has a role in investigating significant contemporary issues. In these cases it also shows that it is not only the subjects which geographers are researching that are important but also the methods and the techniques which are being used to do so.

Teleworking: The myth of working from home BBC News

Drinking, sex, eating: Why don’t we tell the truth in surveys? BBC News