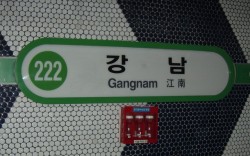 In recent years, Geographers have paid more and more attention to the ways in which wealth can be generated through the images of and associations people make with particular places.  Nebahat Tokatli’s (2012) Geography Compass paper discusses the relationship between place and image for profit-making strategies within the fashion industry.  The paper highlights the work of economic geographers in understanding how positive place-images can be exploited.  Think for example of how fashion firms such as Chanel or Versace have benefited from the premium customers place on Paris and Milan, respectively.

The commodification of the place-image nexus has been illustrated in many other ways; none more so than in the video of the chart-topping music track ‘Gangnam Style’.  The single, by South Korean rapper Psy, was released in July 2012 and debuted at number one in the national record chart of South Korea, reaching the top-spot in the UK chart at the end of September.  The track, which centralises its lyrics around a repetitive refrain has become famous for its associated dance moves, reportedly copied by almost everyone, from this year’s X Factor contestants to London Mayor Boris Johnson and Prime Minister David Cameron.  However, ‘Gangham Style’ can be analysed for more than its dance moves.

“Gangnam Style” is a Korean neologism that refers to a lifestyle associated with the Gangnam distinct of Seoul.  Likened to Beverly Hills California, people living here are fashionable and cool.  The music video shows Psy performing a comical horse-riding dance and appearing in unexpected locations around the Gangnam District, such as an outdoor yoga session and a hot tub. However, everything about the song: it’s dance, looks, the tune, and lyrics are anything but ‘high class’.  Designed to be a parody, Psy himself suggests:

People who are actually from Gangnam never proclaim that they are—it’s only the posers and wannabes that put on these airs and say that they are “Gangnam Style” — so this song is actually poking fun at those kinds of people who are trying so hard to be something that they’re not —Psy (CNN, 17 August 2012)

Parody or not, the song is based around the concept that place-image is something that can be transferred between people, and across national boundaries.  In the same way that Tokatli claims major fashion designers build upon the brand image – borrowing the allure of certain places – this image of Seoul is now being used to make Psy into a mega-star.  Whatever the critique, it is clear that Gangnam Style has swept the world, being watched by over 400 million people – so much so, that UN Secretary General Ban Ki-moon has even praised it as a “force for peace”.

Nebahat Tokatli, 2012, The Changing Role of Place-Image in the Proﬁt Making Strategies of the Designer Fashion Industry, Geography Compass 6 35-43

View all posts by Jen Turner