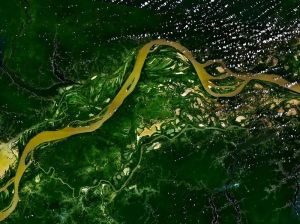 The Guardian recently reported that the Brazilian authorities have begun a ‘crackdown’ on deforestation in the Amazon rainforest.

Monitoring the rainforest with satellite imagery and aerial photographs, Brazil’s environmental protection service seek to fine or imprison those involved in illegal logging.

Such action may be locally effective in the short term. However, with such a large area to police, it is easy for loggers to move their activities elsewhere. Increased attention on one area of the Amazon merely takes the focus away from other regions.

In a 2005 paper in the Transactions of the Institute of British Geographers, Mark Maslin and others take a long term perspective.

Drawing on geological records, Maslin et al. argue that the Amazon rainforest has been a permanent feature ofSouth Americafor the past 55 million years. Having survived for such a long time, you might expect the rainforest to be able to withstand current pressures of deforestation and climate change.

However, Maslin et al. also argue that the rapid pace of environmental change is without precedent in the historical record. Temperatures are rising too fast for the forest to migrate. In any case, the pressure placed on land for agriculture and other human activities is squeezing the available space.

It is difficult to see how anything can cope with the scale of the problem, not least the complex politics and economics involved. However, by placing the scale of change in the context of the geological record, Maslin et al. demonstrate just how urgently action is needed.