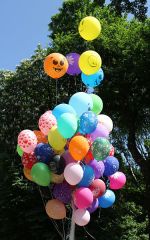 Had you been crossing the English Channel on Friday May 28th, a curious site would have met your eyes – a pilot floating beneath an enormous multi-coloured bunch of balloons.  Entering the record book as the first cross-channel cluster-balloonist, Jonathan Trappe took four hours to fly from Ashford in Kent to his landing ground in a French cabbage field.  Having made a 109-mile flight of this mode before, Mr Trappe turned his curiosity into reality and is quoted for claiming “Didn’t you have this dream – grabbing on to a bunch of toy balloons and floating off?”

I am envious of this curiosity-driven courage and spirit of adventure, and am reminded of reading a forthcoming article by Richard Phillips in TIBG about geographies of curiosity.  Phillips explores how curiosity can be cultivated better and argues that places, particularly universities, “should be refashioned as spaces in which the spirit of adventure thrives” and “in which people feel able to take risks and learn freely”.  He further suggests that academics commend research that openly admits to being driven by personal interest or emotion, and not wrapping it up in objective language of rationality.  Excluding the passions which inspire our research is just one of the ‘enemies of curiosity’ Phillips explores in this more unusual paper.  The enterprising spirit captured in the article, for openly seeking to encounter the unknown, is something that Trappe achieves and something that Phillips believes geographers have much to contribute to.

Phillips, R. (2010)  The impact agenda and geographies of curiosity Transactions of the Institute of British Geographers. Forthcoming