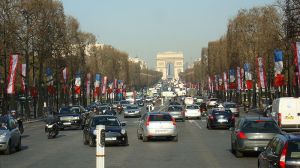 The Champs-Élysées, the most famous boulevard in Paris, has been silenced for a few days – by young farmers! Overnight, lorries brought in tonnes of soil and turned a one-mile stretch of the normally busy thoroughfare into an enormous green space. The aim of the event, which has been organised by the French Young Farmers (Jeunes Agriculteurs) union, is to reconnect the general public with agriculture. Consumer demand for lower food prices is causing financial problems for farmers so they hope to showcase the quality of their produce and demonstrate the effort that goes into producing it.

Reconnecting farmers and consumers is also discussed by Guy Robinson in his article ‘Towards Sustainable Agriculture: Current Debates’ (Geography Compass, September 2009). Since the Second World War, the relationship between farmers and consumers has distanced due to mass production techniques, supermarket-based retailing and government regulation. Gradually people have forgotten where the food they eat comes from and how it reaches them. The system is becoming ever-more unsustainable as fruit, vegetables, meat and fish are flown across the world to meet year-round consumer demand for exotic produce.

Moving towards more sustainable forms of production and consumption will not be easy. Although demand for organic and locally-produced produce is growing, it is still a relatively niche market in overall terms. Changing consumer behaviour – particularly when it requires them to spend more money – is not a simple task. The cows and sheep on the Champs-Élysées over the holiday weekend is a starting point, at least, for reminding people of the quality and diversity of their nation’s food.

Read about the event in Paris on the BBC website