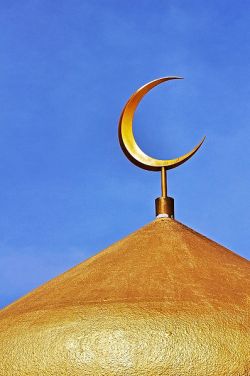 Last week, the Jerusalem Post reported that a French-Algerian homosexual man is planning to open a ‘mosque for gays’ in France and hopes to eventually conduct same-sex Muslim marriages.  Parisian, Mohammed Ludovic Lütfi Zahed, says the mosque, situated in a Buddhist chapel in Paris, will also break another Islamic taboo by refusing to segregate women and men.  Joint gender prayers will also be permitted.  Zahed explained that “in normal mosques, women have to sit in the back seats and wear a headscarf and gay men are afraid of both verbal and physical aggression … After performing the Hajj, I realized that a mosque for gays was a must for gay Muslims who want to perform their prayers.”

It is clear that if this building is opened, it will be to much controversy.  Algerian law bans same-sex relations and France has been divided in recent years upon whether same-sex couples should be allowed to marry.  In finding interest in this recent piece of news I acknowledge this controversy, but do not wish to make this the focus of this post.  Instead, I turn my attention to the complex construction of space that the opening of such a mosque might result in. Whilst homosexuality may be fundamentally at cross-purposes for many Muslims, Zahed recognises a group of people wanting to practice their affiliation with their religion in an alternative kind of space.

In similar vein, an early view article by Claire Dwyer, David Gilbert and Bindi Shah in the Transactions of the Institute of British Geographers addresses such themes. This paper attends to how spectacular new religious buildings have appeared in London’s suburbs, but have been viewed as somewhat incongruous in these spaces.  They exemplify the large golden dome of the Sikh Gurdwara Sri Guru Singh Sabha in Southall, and the Cathedral of the Dormition of the Most Holy Mother of God and Holy Royal Martyrs in Chiswick; its blue dome, covered in golden stars and topped with a large ornamental cross bright above the rooftops of suburbia.  Dwyer et al use three case studies, of different faith groups, from North and West London to explore three distinctive articulations of the relationship between religion and suburban space that that call ‘semi-detached faith’, ‘edge-city faith’ and ‘ethnoburb faith’.

Whilst drawing upon very different examples, it is clear to see that contemporary societal practices are shaping the way in which religious spaces are constructed and used in everyday life.  Here lies a rich discourse that will only become more interesting as faith develops in response to our changing times.

Claire Dwyer, David Gilbert and Bindi Shah, 2012, Faith and suburbia: secularisation, modernity and the changing geographies of religion in London’s suburbs, Transactions of the Institute of British Geographers, DOI: 10.1111/j.1475-5661.2012.00521.x