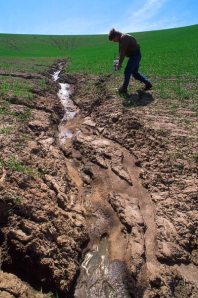 A recent paper by Bilotta et al. (2012) examining the interplay between ecosystem services and soil erosion in Transactions of the Institute of British Geographers, published under the Boundary Crossings subheading, is an excellent example of the importance of utilizing cross-disciplinary approaches when confronting the large-scale environmental issues facing the world today.

References to ecosystem services are featuring much more prominently in the news, as the public, government bodies, academic researchers and mega-business begin to recognize the need to prioritize the natural environment as pressures from climate change, population growth and land degradation unfold.

Providing sufficient food for a growing population is a particularly pressing problem and in fact a recent UN report, quoted in the Guardian, suggests a 2.6% drop in global food yield this year. Offering a medium for food production is clearly one of the most important ecosystem services provided by soil and Bilotta et al. highlight the threat posed to food provision if the dramatic rates of soil erosion observed globally are not reversed.

The Bilotta paper discusses in some detail the biogeochemical relationships between soil erosion and soil nutrient availability, thereby reducing crop yield but more importantly, they highlight three major limitations to current assessments of soil erosion on a global scale. These are a poor understanding of soil formation rates, limited consideration of changes in soil quality alongside quantitative assessments of soil loss and off-site problems triggered by soil erosion, particularly damage to aquatic environments due to the delivery of substantial fine-grained material.

They finish by emphasising the pressing need for interdisciplinary research to ensure efforts to mitigate soil erosion are successful. As awareness of the importance of ecosystem services continue to grow in the public view, hopefully the suggestions put forward by Bilotta et al. will be taken into consideration.