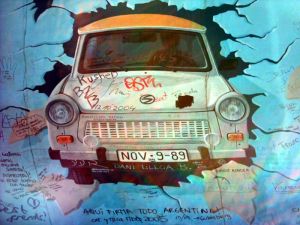 Following on from Fiona’s entry today (below) about a flâneur’s encounter with graffiti in Toulouse, I was struck by one of this week’s news stories.  Tensions over the East Side Gallery – a series of graffiti based images on a particular stretch of the Berlin Wall – have triggered long-standing debates about the role of graffiti/public art in cities.  The Gallery was originally created after the fall of the Berlin Wall in 1989 to bring together (unpaid) artists from East and West Germany in a creative project.  Controversially, a number of pieces have been whitewashed and overlaid with copied images in a recent renovation, described by one commentator as a “faked-up’ pastiche of itself…a Disneyesque, postmodern reconstruction of the art of the Wall designed to please tourists”.  A number of the original artists are now suing the city council over issues of copyright and the reproduction of images without the artists’ permission.

These ethical and legal issues over the display and ownership of graffiti, in this case embroiled with political symbolism and significance, highlights a broader set of complex geographies that interweave ideas of creativity, art, public space, urbanism and place-making.  In the context of this news story, McAuliffe and Iveson’s article in Geography Compass (see Fiona’s entry) also offers valuable insight into the tensions surrounding graffiti, which they describe as “a modern touchstone of urban discontent, a global popular culture phenomena that drives urban managers to distraction” (2011: 128).  In providing a critical review of the literature, they aim to uncover the complexity of graffiti’s dynamic and contested geographies and explore the tensions surrounding public graffiti, which are so clearly demonstrated in the ongoing debates surrounding the East Side Gallery.