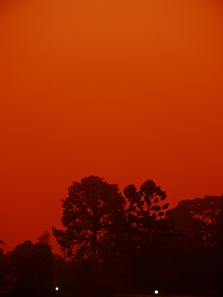 Last week, dust storms in eastern Australia caused havoc to populated coastal areas, diverting flights, disrupting ferries and causing long queues on major roads.  The dust originated from the Lake Eyre region following the movement of a cold front and strong winds eastwards over the area.  Dr Craig Strong from Griffith University, Queensland suggests that a combination of floods, drought and strong winds caused the latest dust events, where sediment deposited by flooding earlier this year, dried out and became available for aeolian transport.  Widespread drought in southern Australia over the last 10 years is also likely to have been an important factor in increasing dust availability due to a reduction in vegetation cover.

In Geography Compass Heather Viles reviews the affect of biological crusts on arid landscape dynamics.  Biological crusts consist of a variety of micro-organisms and lower plants that can play a key role in trapping and retaining dust, providing stabilisation from surface run-off and wind erosion.  The impact of climate change has not been widely researched, but it is likely that changes in precipitation patterns and increases in CO2 have had significant effects on crust stability.  As well as a reduction in vegetation cover, the increased frequency of extreme flood and drought events in Australia may have caused a reduction in the performance of biological crusts as a mechanism for dust retention, thus contributing to the increased availability of dust in the Lake Eyre region.