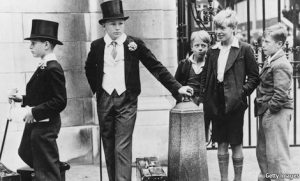 Conceptions of class remain inseparable from contemporary society, according to a BBC-commissioned study. The Great British Class Survey, undertaken by the BBC’s Lab UK and faculty at LSE, University of Manchester, University of York, City University London, Universitetet i Bergen, and Université Paris Descartes, surveyed 161,000 people across the British Isles. The study’s authors argued that ‘class’, as twentieth century writers tended to define it, was ‘too simplistic’.  Rather than an equation of ‘occupation, wealth and education’, class was actually formulated around ‘economic, social and cultural’ dimensions, of which the traditional structure only formed a part. Along with the traditional classes – elite/upper class, middle class (itself a category distinct from US conceptions), and working class – new divisions had arisen: technical middle class, new affluent workers, traditional working class, emergent service workers, or ‘precariat’, the authors’ term for ‘precarious proletariat’. Predictably, the study’s publication catalysed a diverse range of media responses. The Financial Times reminded its readers of how deeply entrenched class was in British history. Tristram Hunt recalled William Harrison’s 1577 Description of England: there were ‘four degrees of people’, led by ‘those whome their race or blood or at least their virtues doo make noble and knowne’. A letter to The Guardian compared it to the hierarchy used by the National Statistics Socio-economic Classification scheme (NS-SEC). The Guardian itself wondered whether the new hierarchy was more reflective of the television programme ‘The Wire‘ rather than of British society.

Critics aside, the BBC survey indicated the continuing influence of class, whether desired or not, in shaping how different people think, act, speak, travel, and shop. Geographers have long been aware of the role and perception class played in British and international cultures. Indeed, in 1995, Gary Bridge (Rodney Lodge) called for a standardised, ‘consistent application of class analysis’ when examining urban and rural gentrification. In a 2004 Transactions of the Institute of British Geographers study, Anthony J Fielding (University of Sussex) documented the spatial organization of Japanese cities by class. Critiquing previous, recent accounts that suggested that Japan’s rapid, postwar capitalist transformation had erased, or at least minimised cities’ ‘social geography’ (defined by Fielding as the distinction of classes or groups in space), Fielding used GIS programming to visually and textually demonstrate how major cities have, in fact, been organised by class and social standing, as is the case in most European and North American cities. Interestingly (and importantly) however, through the collection of mapping of this aggregate data, he suggested that the degree of spatial ‘segregation’ was generally lower than in the West. Comparing Kyoto and Edinburgh, Fielding proposed that the former’s spatial organisation was different, and it experienced a lower, but still quite identifiable level of segregation (p. 83). Indeed, Fielding’s study of Japan implicitly mirrored Jon May’s study, also from the University of Sussex, seven years previously. In the 1996 study, May, evidently fatigued from ‘theoretical literature’ on London’s complex social dynamic, created visual and textual maps of Stoke Newington (p. 195).

Class, it almost goes without saying, infected the storied halls of Lowther Lodge. For some two decades at the turn of the twentieth century, the Royal Geographical Society had debated whether to elect women to the fellowship (women had applied for admission as early as 1847, but the issue was not seriously considered until the 1890s). If women were to be admitted, as Morag Bell (Loughborough University) and Cheryl McEwan (Durham University) recalled, then, as the debaters proceeded to argue, they must be of the right social and economic standing. Returning to more recent issues, JoAnn McGregor posited the rapid growth of Britain’s Zimbabwean community within class ‘differences and identities’, in a fascinating shift from more mainstream studies of Robert Mugabe-era emigration. Regardless of whether the BBC survey has lasting impact, geographers will continue to observe, critique, and play with class.

Tristram Hunt, ‘The rise of the precariat and the loss of collective sensibility‘, Financial Times, 7 April 2013, accessed 7 April 2013.

Gary Bridge, 1995, The Space for Class? On Class Analysis in the Study of Gentrification, Transactions of the Institute of British Geographers New Series 20.2, 236-47.

Jon May, 1996, ‘Globalization and the Politics of Place: Place and Identity in an Inner London Neighbourhood‘, Transactions of the Institute of British Geographers New Series 21.1, 194-215.