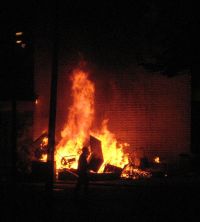 It was a year ago last week that riots broke out in several English cities and our television screens portrayed scenes of violence, looting and arson.  Last week, journalists were sent back to some of the sites where anti-police demonstrations had turned into unrest in order to construct narratives of “the English riots one year on” (The Guardian).  A quick review of this coverage reveals stories from different people who were there at the time –policemen, looters, demonstrators, shopkeepers and property owners.  Next month, academics attending an interdisciplinary conference at London South Bank University will discuss “Collisions, Coalitions and Riotous Subjects: The Riots one year on”.

A specific geographical focus on the riots is proposed in an early view article by Phillips, Frost and Singleton (2012).  Essentially, they propose a research agenda that comprises lessons learnt from research undertaken in the aftermath of riots in Liverpool (1981) and more recent investigations of the 2011 disturbances.  One of the finer examples is a study by Burgess that exposed the way in which media representations created specific ideas of the riots.  Making a comparison between 1981 and 2011, Phillips et al. illustrate the way in which the Liverpool riots were placed within geographies of the inner city, while the more recent riots were positioned through geographies of children and young people.

Alongside consideration of media representations, Phillips et al. recommend an agenda that listens directly to those who were involved in the riots and one which triangulates qualitative and quantitative research.  Such an approach, they argue, will help to ensure that riots become catalysts of change.

Thinking back to the media representation of last week, to what extent did they provoke a narrative of change?

The English riots one year on, The Guardian, 6th August 2012