International relations can be far from black and white, yet one particular piebald creature plays a key role in the game of cultural diplomacy that governments play with each other. Radio recently broadcast The Politics of the Panda (2012). 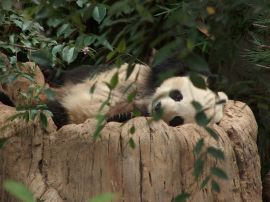 The giant panda is native to western China and one of the country’s principal emblems as well as diplomatic gift of choice. Seven countries currently host thirty-six pandas; each a deliberate effort to foster positive relations between China and people elsewhere. The first diplomatic gift of this kind signified US-China relations in 1972, while the 2011 arrival of Tian Tian and Yang Guang (aka Sunshine and Sweetie), at Edinburgh Zoo, links Scotland more closely with Asia.

As seeming cuddly creatures, the panda can be viewed as an ambassador of friendship in this cultural exchange.  A similar process of cultural diplomacy took place last year when Queen Elizabeth II visited Ireland.  In The Geographical Journal, Johnson (2011) comments on this first official visit by a British monarch since Ireland became independent.

Making space and place explicit in analysis, Johnson argues that the choreographing of particular events at the Garden of Remembrance, the Irish National War Memorial, and Dublin Castle, offered opportunities for rapprochement for past conflicts.  In these shared spaces, what Johnson refers to as ‘memory spaces’, the Queen was key actor in terms of moving both states towards reconciliation.  In this way, the Queen’s role is similar to that of the panda: a diplomatic symbol of generosity and power to nurture political relations.

* “Eats, Shoots and Leaves” is the ambiguous title of a book on the state of punctuation in the UK by Lynne Truss. It derives from a joke on poor punctuation involving pandas.