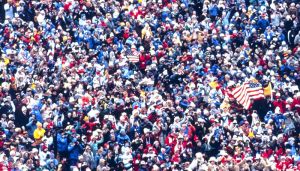 According to forecasts, the seven billionth person will be born today.  Thomas Lovejoy uses this moment, in his article in The Guardian, as a way into discussing a sensitive topic related to stemming population growth in response to climate change.  He states that “The idea of living sustainably, of “going green”, has recently become a buzzword when talking about everything from energy to water to agriculture…. But in terms of our own numbers, we are anything but sustainable.”.  He points out the need for integrated solutions from governments, business and advocates, but continues that “doing any of that without also making efforts to slow population growth makes an uphill climb even more difficult.”  He admits “It’s unpopular to apply sustainability to the concept of population growth, as the word “population” evokes worries about state control and limits on reproductive freedom. But slower population growth can not only lessen vulnerability to climate change impacts, it also has the potential to significantly reduce future greenhouse gas emissions”.

What this debate highlights, amongst other things, is what geographer Jon Anderson has recently noted as “a growing trend to cast the individual as the source and solution to many contemporary environmental problems.”  In his article currently on earlyview in Transactions of the Institute of British Geographers, Anderson argues that in ‘becoming green’, individuals “have to negotiate a range of trade-offs between their environmental aspirations and the realities of life in a developed, consumer-based society”.  Whilst he explores the specific space and identities related to the Centre for Alternative Technology in Wales, UK, this article considers the ways in which tensions around environmental beliefs, practice and lifestyles have led to a ‘politics of pragmatism’.  Although Anderson’s paper is not centred on population growth, it does reflect on the individualisation of environmental challenges, notions of responsibility and tensions around ‘becoming green’ – issues that are being discussed on comments to Lovejoy’s article today…